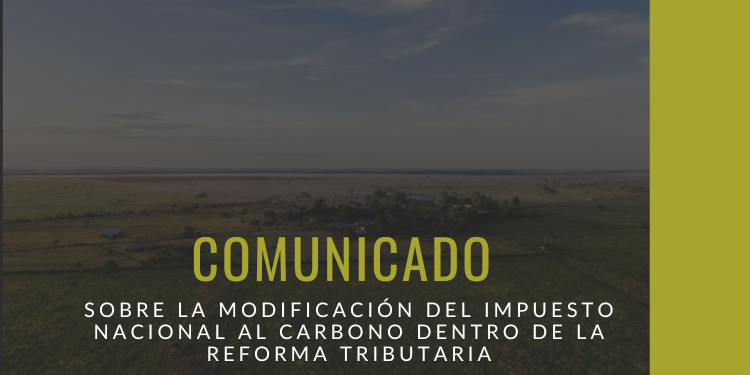 BIOFIX CONSULTING SAS, pioneer company in the Colombian Carbon market and that today has 10 REDD+ projects in association with 25 ethnic communities in Colombia, made up of 16 indigenous reservations and 9 community councils, located in the departments of Chocó, Valle del Cauca, Vichada, Guaviare and Guainía, We express our rejection of the recent modification to the treatment of the national carbon tax, defined in paragraph 1 of article 39 of the recent tax reform approved by the plenary sessions of Congress.

Paragraph 1 of article 39 of the aforementioned reform project restricts the non-causation of the tax to 50%, This implies that the demand for emission reduction certificates or carbon credits is reduced by 50% or more, through which carbon neutral certification is obtained. The foregoing generates as a consequence an abrupt reduction in the income of about 50,000 people belonging to ethnic communities in the country who benefit from the commercialization of these credits, through GHG mitigation initiatives in the Forestry sector, specifically REDD+ projects.

Projects that to date have achieved the protection of 1,300.00 hectares of forest, the reforestation of 110,000 native and fruit trees and the reduction of 17.4 million tons of carbon dioxide, a milestone that has made it possible to ensure financial income for communities, through the sale of carbon credits and contribute to the national emission reduction goals, within the framework of the commitments assumed by the Colombian state in reducing carbon emissions. GHG.

The modification proposed by the government would generate a detriment to the living conditions of these communities who, thanks to the REDD+ initiatives, are already making investments in lines of health, education, infrastructure, access to education, drinking water and sanitation, decent housing, transportation, and food security, while fighting deforestation generated by illicit crops and other illegal activities.

Additionally, these projects are carried out in strict compliance with the rights to self-determination, self-government and Free Prior and Informed Consent, in compliance with the socio-environmental safeguards of the United Nations Framework Convention on Climate Change. Similarly Said projects must comply with rigorous quality standards and conformity assessments by independent third parties, in light of the principles of the monitoring, reporting and verification system established by Resolution 1447 of 2018, aspects that make these initiatives a supremely effective tool to combat deforestation and poverty.

Restricting the results of these initiatives within the Colombian carbon market violates not only the rights of these communities, but also the legitimate trust and legal certainty that assists them when there is an abrupt and untimely change regarding the climate financing that they have been receiving and that, as has been indicated, has allowed them to substantially improve their conditions and quality of life.

It is necessary to remember that ILO Convention 169, ratified by Law 21 of 1991, in its article 6 ratifies that any legislative measure that directly affects ethnic communities must be consulted. Thus, and for the previously mentioned arguments, the paragraph of article 39 of the aforementioned reform, It must be consulted prior to its approval as it directly affects the ethnic communities that have been developing REDD+ projects.

Prior consultation is a fundamental human right, due to its relationship with the physical and cultural life of peoples and their survival. Processing this bill without consultation is an obvious violation of fundamental human rights and causes great harm to communities. For these reasons we appeal to common sense and We call attention to the National Government to withdraw said restriction established in the paragraph of art. 39 of the tax reform project, doing so is an act of coherence with the campaign banners of President Gustavo Petro, in the cause of vindicating the rights of ethnic communities in Colombia.

With this background, it is confirmed that the Government's approach in relation to the national carbon tax It would be a setback to the advances that Colombia has made in terms of emissions reduction, climate financing, as well as a detriment in the living conditions of the families that make up these communities and that work today for the conservation of the forests.

For these reasons we request the Government of President Gustavo Petro to eliminate paragraph 1 of article 39 of the aforementioned reform due to its direct impact on Afro communities and indigenous peoples that have been developing REDD+ projects in the country.