How to mitigate climate change? In the woods is the answer

How to mitigate climate change? In the woods is the answer

In issue 30 issue of the journal Management Colombia, BIOFIX highlights the role of forests in the mitigation of the effects of climate change.

As an expert company in nature-based solutions, BIOFIX has been involved in the conservation of approximately 1300.000 hectares of tropical forests, thus helping to take care of effectively ecosystems and to offset the emissions of greenhouse gases.

In its most recent annual report, NASA and the national Oceanic and Atmospheric Administration National administration (NOAA) warned that the 2021 was the sixth warmest year since 1880, when they began making records. To continue on this path, in just a decade it will reach the limit set in the Paris Agreement 1.5° C, which would put at risk the different forms of life.

Aware of this scenario, the Organization of the United Nations (UN) established the mechanism of Reducing Emissions from Deforestation and forest Degradation (REDD+), through which it aims to stop the destruction of these ecosystems to curb climate change.

Given that the protection of forests accounts for about 30% of the work needed to keep the temperature increase in global average below the established, the colombian company BIOFIX CONSULTING has been dedicated to promote, create and manage projects and initiatives forest with the seal REDD+, which carries with it a power in favour of the conservation and sustainability.

In fact, the company, being a pioneer in the mitigation of greenhouse gas emissions, leads the execution of 9 REDD+ projects along with 24 communities, divided in 16 Community Councils and 8 Indigenous reserves who are the custodians of the large tracts of forests that have their territories.

With these projects looking for the conservation of approximately 1.300.000 hectares of forest in the colombian territory and also benefit more 41,000 people, afro-colombian and indigenous people; to strengthen its territorial governance and the agricultural sector, in addition to boosting the oversight community and reforestation participatory.

As one of the founders of the Colombian Association of Actors of Carbon Market (ASOCARBONO) and a member of the Association of International Emissions Trading (IETA), BIOFIX leverages the marketing of carbon credits, to contribute to the generation of green business in collective territories and indigenous reserves, which leads to the attainment of better living conditions and care of the biodiversity; to be governed under the standards of Verra, Cercabono and Proclima.

In addition, to promote the strengthening of the territorial governance by green business BIOFIX is driving the development of forestry in the country through the planting more than 110 thousand native trees and fruit trees as the Palm of Cumare, Palma de seje, moriche Palm, Machaco, Yopo, Cedar, Flower Yellow, Cashew, Moringa, between others, mainly in the departments of Chocó and Vichada.

This is in order to join to the goal of the Ministry of Environment and Sustainable Development of plant 180 million trees by 2022.

Taken from the edition 30 of the magazine Management Colombia. 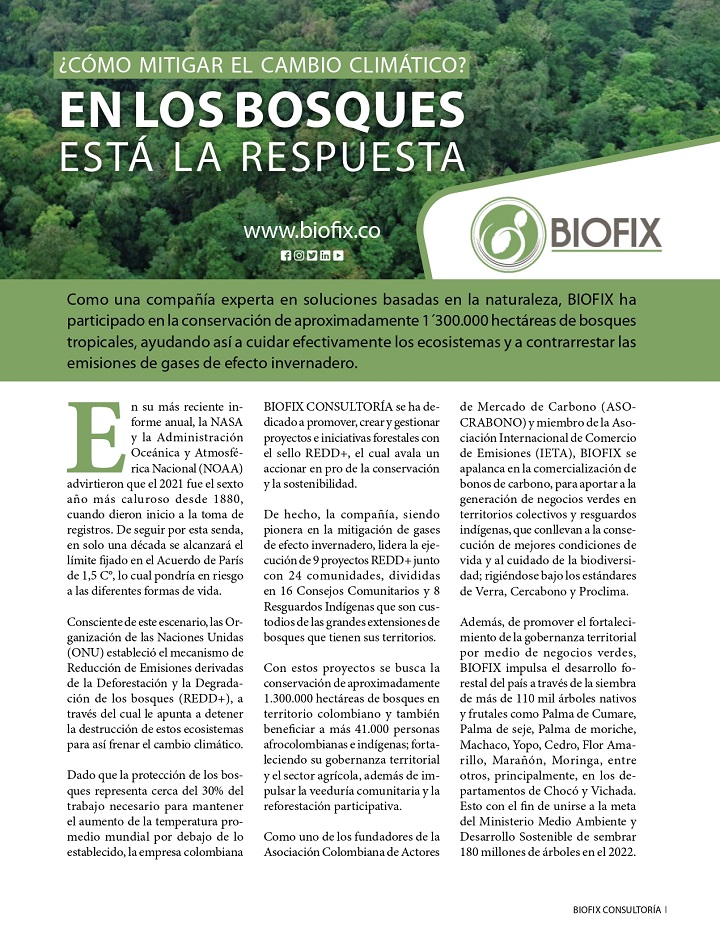